Ask any runner, and they will tell you that the best part of running is the “runner’s high”; that feel-good euphoria sensation you get after putting your time and energy into what in my opinion is pretty equivalent to torture. As you can probably tell, I’m not much of a runner. So being the nonathletic person that I am, I turned to activism to get my endorphins going. An “activist’s high,” if you will. To me, that feeling you get after doing good in the community is one of the best feelings in the world. That was the idea behind BAYS’ Day of Action. What better way to empower youth to make a difference than to allow them the opportunity to try it out? On February 16th, young people from all over California headed out into their communities to achieve that “activist’s high” by volunteering at various LGBT organizations including Project Open Hand, the Billy DeFrank LGBT Center, EQCA, and the Rainbow Community Center. The day was a great success! Students got to learn about different LGBT organizations and what they do, help out their cause, and meet fellow activists of all ages and walks of life. GSA Member Lindsey Chen talks about her experience at the Billy DeFrank Center, saying, “We were welcomed with a tour and panel of speakers because the staff wanted to illustrate why having an LGBT center is so important. We got to hear stories of how the center has changed lives, and then got to help out the center by stuffing envelopes. It was really nice to give back to an organization that was giving so much to the community.” Students ranging from LA to San Mateo and San Jose to Oakland, all unanimously agreed that the Day of Action was so much fun and gave them that good feeling afterwards that makes them want to volunteer in the future. Hope to see you all next year!

I’ve got a confession. It’s urgent – I can’t hold it in any longer. It’s time I admitted it. To my family, to my friends, and to myself.

Phew! Now that I’ve got that off my chest, let’s dig in. Here are my rankings of the remaining eleven queens, for all they’re worth. In the words of RuPaul herself, “Gentlemen, start your engines! And may the best woman win.”

Vivienne is fierce, but she’s been too meek for Drag Race thus far. While she’s clearly a talented queen, her personality is just too small – and I don’t see it growing in the frame of the competition. If she comes alive, it will be a welcome surprise, but as of now she’s sinking fast. 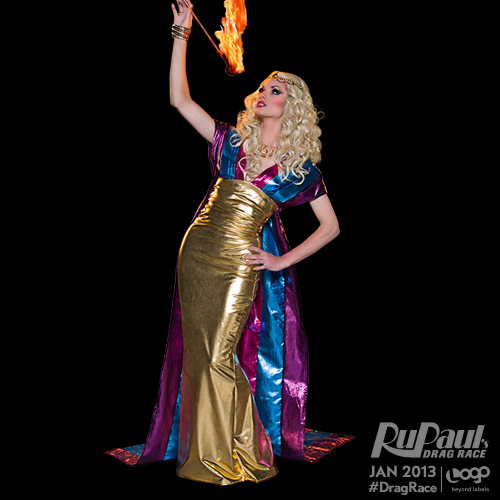 Another beautiful queen who’s just been too quiet, Ivy Winters seems to be lost in the fold. Her looks have been consistently on point, but her performance just hasn’t demanded attention yet. If she doesn’t step it up soon, I see her sashaying away in the very near future.

In her own words, Jade Jolie is serving fish on a platter. But that seems to be all she’s serving, because beyond her looks, Jade hasn’t done much to stand out thus far. She loves to stir the drama though – and we know how much Ru loves her drama – so Jade might be sticking around for a while.

Lineysha Sparx is, without question, the most gorgeous queen of the competition – in and out of drag. Her look is fierce, and her movements flawless. But her focus seems to be waning, and she might be leaving earlier than most expect. This queen needs to step into her potential.

Miss Alyssa might be the most decorated queen of them all, but her pageant experience won’t bring her everything she needs to win this crown. She’s got to push herself to climb her way to the top of RuPaul’s Drag Race.

Just edging out Alyssa is her arch nemesis: Coco Montrese. Coco may have stumbled this week, but her fierce lip synch assures that she won’t go down that easy. She’s the most seasoned queen of the bunch, and if she focuses and relies on her experience, we’ll be seeing Coco at the top week after week.

A little humor goes a long way. A lotta humor, and you might have a star on your hands. Jinkx Monsoon keeps us laughing, and her sweet personality gives her an A in charisma. She’s got vision and purpose, to boot. Watch out for this queen – she might be the sleeper of Season 5.

I. LOVE. ALASKA. This queen’s original, couture style is a welcome change among this field of pageant girls. She continually pushes the envelope, and her looks show the art in drag. I even support her decision to do the challenge in boy drag. She pulled off her character, and showed her versatility – no harm no fowl in my book. I’m having a fantastic time watching Alaska step out of Sharon’s shadow, and into the spotlight.

Roxxxy Andrews has been, thus far, flawless. She makes the competition look effortless – which is, after all, one of the greatest talents a performer can have. Her class and kindness also shine, and with the way the judges talk about her, it seems like we’ll be seeing a lot of Roxxxy in the coming weeks.

Detox is already a judge’s favorite, and a formidable contender. Her experience shows, as she consistently turns it out from week to week, and carries herself with the confidence of a veteran. As long as she keeps her composure, she could ride this momentum all the way to the crown. And I don’t see her slowing down anytime soon.

Honey Mahogany is, by far, the most underrated queen in the competition. This San Francisco queen has the talent and class to turn it out week after week – and has already shown her ability to work under difficult conditions (See: A limp Coco Montrese playing her “ventriloquist doll”). Honey is smart and elegant – once she’s recognized for her consistent performance, she’s going to take off. Keep an eye on this one.

Upon hearing the proposal in Tennessee of the “Don’t Say Gay” law and “Classroom Protection Act”, which makes it ok for educators to out LGBT students to their parents, I was shocked. As a student, I find it totally inconceivable that an educator would be so brazen to enter a side of my personal life that is of no importance to them.

Growing up I viewed the counselors office as a safe environment where I could share without fear of repercussions, but if this law is to be passed it would turn that environment into one of fear. The detrimental effects of the passage of “Don’t Say Gay” would manifest themselves through LGBT youth who already are put in a less than advantageous position in school.

As section “B” states, any subject material “inconsistent” with human reproduction is banned, depriving children of full enrichment and keeping youth in the dark about a world rapidly growing around them.

Also in subsection “A”, Campfield states that the human sexuality is a subject that is too complex for students to learn and therefore should be prohibited. As sexual education is an extremely important part of preparing youth for adulthood, all should be welcomed under the blanket of education, regardless of alignment.

You can read the full bill here.